The Public Square with Gabby Rivera

You're invited to join this new lecture and conversation series, "The Public Square" at the Martin Luther King Jr. Memorial Library."

The Martin Luther King Jr. Memorial Library is excited to continue its tradition of being a center for community engagement by inviting leaders, innovators, and the public to talk about the next phase of their work or scholarship. Join us on Mar. 4 where author and creator of Marvel's America Chavez Gabby Rivera will discuss the next phase of her work.

Check out work by Gabby Rivera with your DC Public Library Card by clicking the images below. 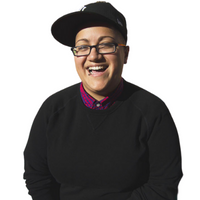 Charismatic and charming, Gabby Rivera is dedicated to empowering people and improving our marginalized communities. She made major waves for her Marvel series starring America Chavez: a queer, Latinx superhero who’s been written and designed, crucially, by a queer Latinx. And while the series tackles issues like America’s ancestry and ethnicity, it’s also a comic book with wide appeal: committed to snappy one-liners, blowing stuff up, and beating up the bad guys, naturally. Gabby shows how our differences are a gift—one that empowers us to inspire others and tell new and unique stories. No matter who you are or where you’re from, Gabby champions telling your own story as a form of love and revolution.

Gabby’s newest project is b.b. free, an original comic series following 15-year-old b.b. and her blossoming cosmic powers, in a post-apocalyptic world, not quite like anything you’ve seen before. Gabby calls b.b. free “a bouncy love letter to queer kids everywhere, especially the chubby Puerto Rican ones.” She’s also the author of Juliet Takes a Breath, a YA novel listed by Mic as one of the 25 essential books to read for Women’s History Month. It’s a critically acclaimed coming-of-age story starring a queer puertorriqueña who leaves her native Bronx behind to intern with one of her literary heroes. “I strongly encourage you to read Juliet Takes a Breath,” writes Roxane Gay. “It’s quite dazzling, funny as hell, poignant, all the things.” Witty, authentic, and humming with the full complexities of modern life and radical politics, it was called the “dopest LGBTQA YA book ever” by Latina magazine and was re-published in September 2019.

Gabby also hosts a podcast titled Joy Uprising, featuring interviews with Gabby’s “favorite revolutionary humans,” many of them queer people of color, where they share how they find, maintain, and nurture their joy in this chaotic world. As an activist, Gabby also gives back. She worked with Autostraddle.com for over five years as the QTPOC Speakeasy editor and A-Camp staff. A film and multi-media teaching artist, she’s worked with social justice organizations like DreamYard Project, Inc. She’s appeared as a featured panelist and counselor at the annual Autostraddle Queer Women’s Conference, and has presented at the Allied Media and Digital Media and Learning Conferences.